In Arabic short vowels are not a part of the Arabic alphabet, instead they are written as marks over or below the consonant and sometimes over or below a long vowel. To make it easy we will take an example in English: the word Canada is written as CNDA but using Arabic Alphabet, the vowel A between C and N and between N and D are omitted, instead they’re replaced by small symbols, especially because they’re only short vowels, you see the little dashes on the top of C and on the top of N in the image below, they’re called FATHA in Arabic, meaning the short vowel “A” in English, so instead of writing a word full of vowels in Arabic, we only write the FATHA on the top of a consonant to indicate a short vowel “A”, and also we have symbols referring to short vowel “E” or “I” , and also a symbol for short vowel “O” , actually this is a good idea, because it’s saving space and also has an other advantage that we will see later. You may have noticed that the consonant D and the vowel A don’t have any symbols on the top of them in the image below, that’s because the “A” at the end is considered a long vowel in this word, so it’s the vowel of “D”, no need to add another vowel on the top of “D” since the long vowel “A” is already helping us pronounce the word the right way. Now you can look at the word Canada in Arabic; you will see that it has the exact symbols as the word CNDA.

The table below shows other types of symbols referring to Arabic short vowels. First we see Washington the way it’s written in English, and then we can see it using English Alphabet but Arabic symbols of short vowels. And finally you can see the word in Arabic with its full short vowels.

“WA” as you noticed doesn’t need a symbol, because the “W” is followed by a long vowel “A”, “SH” is not followed by a vowel, which means that we need to add a short vowel referring to “i”, and indeed we added one already, it’s the tick below the “SH” which is called KASRAH, you can also see it marked as (#3). The “N” has a small circle on the top of it, that symbol is called SUKOUN (marked as # 4 in the table below) referring to a consonant without a vowel, So any time we have a consonant that doesn’t have a vowel, we just add that small circle on the top, note that the SUKOUN should always be placed on the top and never below a consonant. So we used the Sukoun in this word because we didn’t say NA NO NI but we just said N. Now let’s look at the T, it has a little symbol which looks like comma on the top of the letter, that symbol is called DAMMAH (# 2 in the table above) referring to a short vowel “O” , so when we add DAMMAH to the letter “T”, we will get “TO”, easy, isn’t it! And finally as we have seen before, the final N has another SUKOUN meaning that the N is without a Vowel, and should be pronounced N full stop.

Let’s review what we just went through.

4 = SUKOUN = Used for consonants lacking a vowel after them.

6= KASRATAIN= double KASRAH (KASRAH on the top of another KASRAH)= KASRAH+ N= the short vowel “i” or “e”+ N: Kuratin= كرةٍ =a ball

7= DAMMATAIN= double DAMMAH (DAMMAH next to another DAMMAH)= DAMMAH+ N= the short vowel “o” or “u”+ N: Kitabun= كتابٌ= a book

The table below shows the long vowels in Arabic, they’re considered long vowels because of the stress they put on a given vowel, same thing exists in English, the word “exceed” should be stressed in the vowels “ee” or “loose” the stress in the “oo”, note that these long vowels are also considered some sort of consonants ( their pronunciation as a consonant can be found on the page” ARABIC ALPHABET”.

There is also the SHADDAH, it’s the symbol marked as number 1 on the image below, used when we have a double consonant, like instead of writing the proper name (ANNA with double “N”, we only write it with one N and add SHADDAH on the top of N, the example # 2 shows how the SHADDAH placed on the top of the letter T in Arabic, the transliteration of the word is QATTA’A which mean the verb “to cut” in Arabic it’s written QATA’A and instead of writing double T, the word has only one T and a SHADAH on the top of it.

Example # 3 shows a little symbol on the top of the ALIF which looks like the Latin ~, it’s called MAD, and mostly used on the top of ALIF to express a long “A” something like “AA”, the word shown in example # 4 is AAB, it means the month of August, but the MAD is not used that often, so you will come across it but rarely. 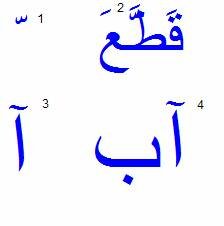 Finally, This may surprise you but short vowels in Arabic are not used that often, you may come across them if two words look the same and the writer wants you to distinguish between them so that they won’t be confused, the person would than add only the vowel which doesn’t exist in the other word, but other than that sometimes you can read a whole text without coming across any short vowel. The reason is that in Arabic most words are distinctive without short vowels; I will give you an example in English in the Image below:

It doesn’t take that much thinking to know what do these words mean, I omitted 2 vowels from Canada for example, and two vowels from the word Computer ... that’s how reading Arabic works. Sometimes we have to add a vowel because it’s a long vowel and not a short one like the “a” in Cnda.

Below is an example of how the verb “to write” is written in Arabic, it’s written كتب which is equal to “ktb” in Latin alphabet, but we don’t read it like “ktb” but as “kataba”, as you have noticed 3 vowels are added when you pronounce it, but when you write it, only the consonants are enough to give us an idea about the word. Writing only one verb in Arabic alphabet without short vowels saved you the time to write 3 vowels, imagine how much it could save you when you write a text…

In short, short vowels that are presented as symbols are not important to read Arabic, but they make it easy to read for beginner and also to avoid confusion between two similar looking words.

Try to master these Arabic vowels as they’re very important for beginners.